1960s
This informal group decided to form an association in the next decade, and officially became the Washington Association of Defense Council (WADC) in 1962, with Jack Scholfield named as the first president.  The original by-laws were signed by 23 prominent Seattle-area civil defense attorneys, and the group established a regular system of bylaws, membership dues, regular meetings, and annual officer elections.

In the mid-1970s, the WADC Board of Trustees decided to invite defense attorneys from areas other than Seattle in an effort to make the organization a statewide organization.  Prominent defense attorneys from around the state became involved in the organization.  Membership increased from 75 Seattle-area attorneys to 150 attorneys practicing throughout Washington State.  The Board of Trustees held meetings all over the state, and the bylaws amended to reserve two Board positions for dedicated Eastern Washington trustees.

In 1965, WDAC hosted the first-ever Judicial Reception when the current WDAC President hosted twenty judges and association members in his Seattle home.  The WADC was also an active participant in conferences and seminars for the Western Washington legal community

The WADC held its first Annual Convention in Port Ludlow during this decade, with the intention of creating a relaxed environment to meet with fellow attorneys, family, and friends.

The 1980s brought a period of substantial change and growth for the WADC.  By 1984, membership had grown to over 400 members and management of the organization was beyond the capacity of the Board of Trustees alone.  Consequently, the Board decided to hire the first Executive Director, Nora C. Tabler, on November 1, 1986.

In 1987, the name of the organization was changed to Washington Defense Trial Lawyers, which the membership thought was a more appropriate and inclusive name.  The counterpart plaintiff’s association threatened a lawsuit, claiming that the new name was “deceptively similar” to its own, but never followed up.

In 1989 WDTL was named the recipient of DRI’s Rudolph Janata Outstanding Achievement Award as the “Outstanding Defense Bar Organization in the Country.”  This achievement would be repeated in 2016.

WDTL’s first woman president, Palmer Robinson (later to serve on the King County bench), was elected in 1991, and the Board of Trustees was expanded to nine members in 1992. A number of new committees were established during this period in order to serve the needs of and increase the opportunity for participation among the members.  The Amicus Curiae Committee filed over 35 briefs in the Washington appellate courts from 1989-1993.

Under WDTL’s inspiration and leadership, and jointly with the WSAJ, the Washington Foundation for the Courts was formed as an IRS 501(c)(3) corporation to give much needed financial support to the court in our state.

The WDTL Executive Director Kristin Baldwin was hired in 2004, and she initiated and managed numerous innovations that increased the effectiveness and efficiency of the organization.  The membership directory went completely online in 2004, as well as all event registrations.  In addition, the organization’s member publication Defense News went fully electronic, and a six member Editorial Board was established with the current editor as chair.  In 2009, WDTL began utilizing social media tools to further engage members and to reach out to the larger community, including Facebook, Twitter, and LinkedIn pages.

In 2010, WDTL submitted its first Amicus brief to the U.S. Supreme Court.  The WDTL is committed to diversity in all its forms and adopted a diversity policy in 2013.  In 2014, following the resignation of Kristin Baldwin, WDTL Trustee Maggie Sweeney was hired as the new executive director.  Under her management and leadership, WDTL has a new website, a more efficient way of handling membership renewals, and a more streamlined listserv system.

The WDTL has streamlined legislative issue voting for within the Board and made huge inroads into judicial continuing education for judges.  The organization continues to grow and change to meet the need of the civil defense bar. With over 700 members, the WDTL is a vibrant community of defense attorneys with close connections to the state’s law schools, the State Bar association, and the bench.

Written originally by Michael Runyan and revised by Michael Nicefaro.
[1] Then known as ATLA (American Trial Lawyers Association), and now known as the American Association for Justice. 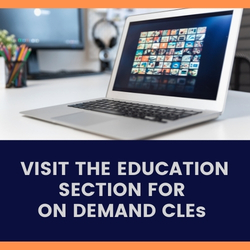