Kelsey Shewbert is a partner at Holt Woods & Scisciani LLP who focuses her practice in complex civil and commercial litigation, including personal injury, product liability, premises liability, transportation and construction defect. Ms. Shewbert is licensed to practice in the state of Washington and Alaska. She is also licensed to practice in Federal Court in Washington. Ms. Shewbert has successfully tried cases in both State and Federal Court, involving personal injury, premise liability and construction defect.

Brandon Smith is a partner in the Seattle office of Holt Woods & Scisciani LLP. He focuses his practice on a variety of complex commercial litigation, including construction, products liability and professional malpractice. Prior to joining Holt Woods & Scisciani LLP, Brandon represented financial institutions in banking law disputes. He also has substantial experience in class action lawsuits.
We completed a three-day trial in Clark County from November 23-25, 2020.  The trial was a good example of what to expect for in-person jury trials in Clark County and how other counties in Washington may handle jury trials until social distancing guidelines are lifted.

Clark County developed the following protocols to protect the health and safety of jurors: requiring temperature checks and face masks for all who enter the court facility, providing KN95 face masks for all jurors, reconfiguring jury assembly rooms, courtrooms and lobbies to allow for social distancing, contracting with an alternative reporting location for jurors to allow for greater social distancing, staggering time intervals to reduce the number of jurors reporting at the same time, ensuring sanitizing stations are readily available, and implementing heightened cleaning protocols.

Jury selection took place at the Clark County Fair Grounds in a large exhibition hall.  The jurors were sat six feet apart in rows with large walkways.  Counsel was provided microphones to speak to the prospective jurors and the jurors were asked to walk to one of two microphones to respond to questions during voir dire.  While it appeared that some jurors were reluctant to participate by speaking into the microphone, the general participation of the jury was similar to that of a “regular” voir dire process in the courtroom.

Counsel and the judge agreed to strike a few jurors given the juror’s health concerns expressed during voir dire.  The jurors that were stricken expressed pre-existing conditions or age-related concerns.  The judge was similarly reluctant to discharge prospective jurors for employment or childcare-related conflicts.  As is typical, counsel was provided the opportunity to issues peremptory challenges.  A twelve member jury was empaneled with one alternative for a total of thirteen jurors.  The parties considered taking a second alternate because of COVID-19 and because the trial was taking place the three days before Thanksgiving.  Ultimately, we did not lose a single juror during the course of the three day trial and the lone alternate was dismissed after closing arguments.

After the jury was empaneled, the judge read the preliminary jury instructions before dismissing the jury for lunch.  The Fair Grounds are approximately a fifteen minute drive from Clark County Superior Court, so the jury was provided ample time to have lunch and travel to the Court for afternoon opening arguments.

The courtroom was reconfigured to include a host of new safety protections, such as plexiglass barriers between each counsel and the bench, jurors sitting in the gallery and plaintiff being required to sit in the jury box because there was no room at counsel table.  All individuals in the courtroom, including live witnesses, were required to keep their masks on at all times.

Counsel sat facing the jury with their back to the bench and the witness box.  This created a unique paradigm where counsel was unable to see the jury while a witness testified. 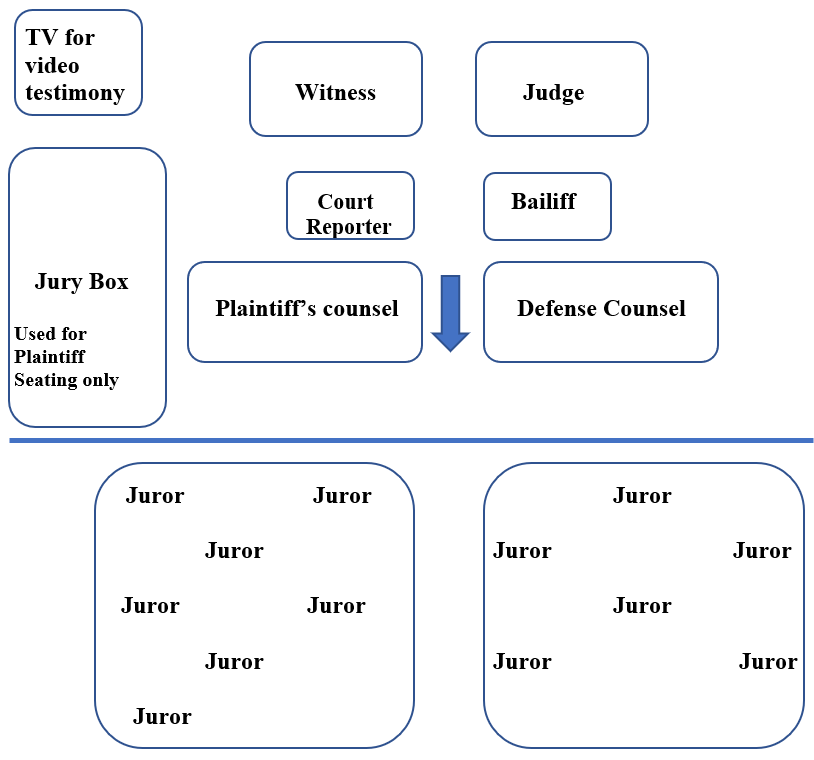 Because the jury was seated in the gallery, the public was not allowed to sit in the courtroom during the trial.  Instead, there was a live video stream available for viewing by the public of the entire proceeding via Clark County’s website.

Sidebars were not permitted.  Instead, the jury was required to leave the courtroom if counsel needed to speak with the judge outside of the jury’s presence.  This caused longer delays than normal and resulted in the inability to resolve some issues that might have otherwise been resolved if sidebars had been permitted.

When thinking about jury trials during the pandemic, attorneys and clients have expressed concerns that jurors will be unable to complete the trial, be inattentive (particularly in the case of Zoom trials), and have difficulty assessing the credibility of witnesses who are wearing masks.  As discussed above, we did not have an issue with jurors being unable to complete the trial, although this could have been an issue had the trial lasted longer than three days.  The jurors also seemed to pay attention to the proceedings, asking the judge, attorneys and witnesses to repeat what was said if they were not able to hear, a situation that arose on multiple occasions with everyone speaking with a mask on.

The jurors also appeared to appreciate and possibly give more credence to those witnesses that appeared in-person and gave testimony with masks on.  Although the typical concern is that jurors will distrust witnesses wearing a mask, we found that jurors were more receptive to live witnesses than the witnesses appearing by video that were not masked.

There are several complex issues surrounding the resumption of jury trials during the COVID-19 pandemic.  The courts, already overburdened with growing dockets before the pandemic, are struggling to reconcile the need for jury trials with health risks associated with COVID-19 and State and Federal guidance on social distancing.  In attempt to combat this dilemma, courts around the country have tried countless experimental efforts to resume in-person jury trials.  Our experience, while not traditional, demonstrated that Clark County has found a way to effectively balance the two competing concerns.