Jury Trials in the Pandemic
A Merger of Technology and Novel Solutions
Tuesday, November 10, 2020
by: David D. Mordekhov
Section: Fall 2020

David D. Mordekhov is a member of Gardner Trabolsi & Associates. David has over 15 years of experience with a primary emphasis on product liability, toxic tort, and personal injury litigation. He handles the defense of personal injury suits, including asbestos claims, premises liability, product defect, and motor-vehicle cases. David has acted as local counsel for a number of national product manufacturers, distributors and retailers sued in Washington courts.

Email
As America continues to grapple with the effects of the COVID-19 pandemic, the judicial branch is racing to re-engineer the jury trial for the coronavirus era.  In the wake of national lockdown, several schools of thought emerged on resuming jury trials.  First is a completely virtual trial by

jury, where the entire case -- from voir dire to jury deliberation -- unfolds online.  This model originated in northeast Texas where one county judge famously told his jurors: “You are at home. The courthouse came to you.”

The second model is the plexiglass-facemask-social distancing jury trial where participants wear masks and remain six feet apart.  The court bench is wrapped in plexiglass, and when possible, judges hold ad hoc court at off-site locations such as convention centers, gymnasiums, or school facilities.


Protecting public health while safeguarding individual rights to trial by jury is a delicate balancing act.

In a strong nod to the public’s vote of confidence, Washington’s justice system never came to a screeching halt due to the COVID-19.  But we got dangerously close to it when, on March 18, 2020, our state Supreme Court halted jury trials and suspended all nonessential court services. Maintaining an indefinite pause on jury trials until the pandemic’s end was not  an option, so what followed was an unprecedented joint effort -- spearheaded by workgroups from the state judiciary, health authorities and University of Washington scientists -- throwing their weight behind a push for innovative solutions to keep Washington’s wheels of justice churning.

The result was a COVID-19 jury trial system that looks dramatically different than the one we are all used to.  By mid-summer, King County Superior Court was already mailing out freshly printed jury summons with a seemingly counterintuitive inscription: “Do NOT report to any court locations.” 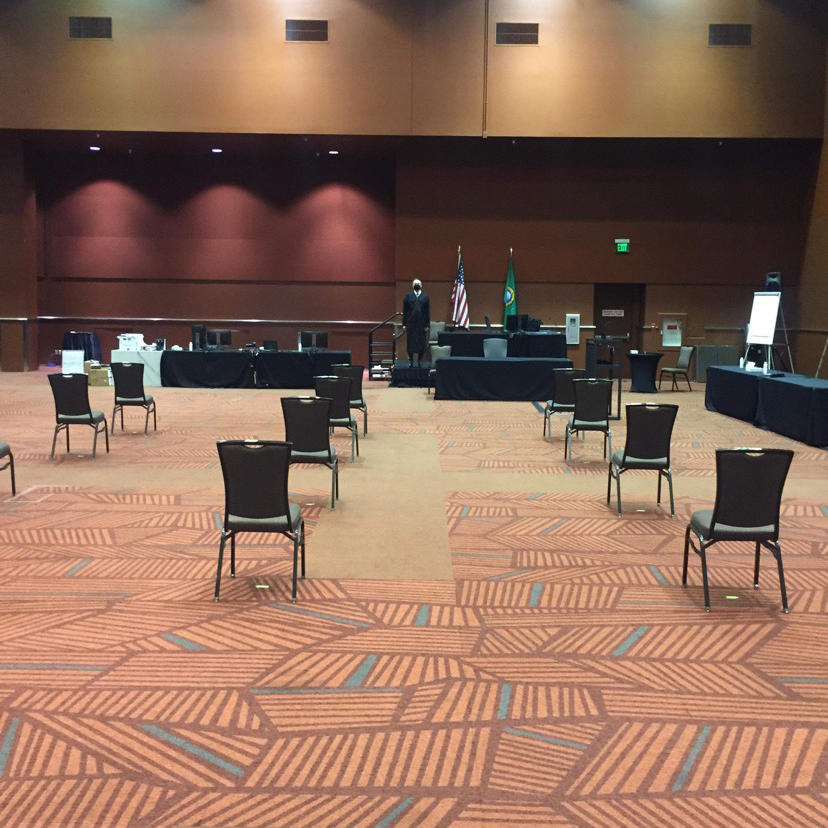 King County was an early adopter of a “hybrid” jury trial model where jury selection is done by Zoom, while the remainder of the trial is conducted in-person.   As a ringing endorsement to the feasibility of this approach, by early fall of 2020, a King County jury was empaneled via Zoom and seated at the Meydenbauer Center in Bellevue who returned the first in Washington COVID-19 multi-million-dollar verdict in an asbestos case.

Virtual jury selection significantly reduces foot traffic at court facilities, but social distancing still requires an abundance of free space to hold jury trials.  At the helm of Presiding Judge Jim Rodgers, King County Superior Court solved this problem by re-opening its two existing courthouses for criminal trials, with only every other courtroom being occupied by a judge. The freed space is used to accommodate empaneled jurors.

The Honorable Judge David Keenan, one of King County judges hearing civil jury trial at Meydenbauer, in a Zoom video interview said that he is pleased with the way Zoom jury selection works: “You may be losing on the person’s overall appearance, but you’re gaining on having a close up of their face and seeing them in their environment.”  He also pointed out that he is very pleased with the positive response rate by the jurors: “I am not releasing any more jurors than I normally would.”

Judge Keenan’s experience appears to be in line with the national poll by the National Center for State Courts reflecting a steady 70% confidence in state courts, the same as the pre-pandemic average.  Some attribute this to the fact that virtual courtrooms make it much easier to respond to jury summons.

Opponents of the forced shift to virtual jury selection argue, however, that Zoom reduces people to glorified talking DMV photographs on a monitor such that the camera quality or lighting angle may play a bigger role than the subtle behaviors revealing one’s true character. Trial lawyers rely on face-to-face interaction during jury selection to detect subtle behaviors, nuanced body language, and overall appearance of each prospective juror.  But in virtual jury selection, many of those attributes are lost.  Ashley Nagrodski, a WDTL member and a partner at Smith Freed Eberhard in Seattle, recently tried a case at the Meydenbauer Center and, although her Zoom jury selection was relatively straightforward, she missed the attributes of an in-person selection:  “I realized I didn't truly know what my jurors looked like until they walked in,” Ms. Nagrodski described her experience of meeting her empaneled jurors for the first time in person after the Zoom jury selection.

Face masks also present a set of challenges -- they can easily become the bane of any trial lawyer’s existence. The fabric makes it hard to project and use voice modulation, which renders vocal tonality -- an otherwise powerful oratorial tool -- largely useless.  Ian Birk, a seasoned civil litigator in Seattle and a partner at Keller Rohrback says this about his recent civil jury trial at the Meydenbauer: “I'm soft spoken and projecting so that everyone could hear becomes a challenge.”  The problem is not only that the speaker is muffled, but also that the audience is spread so far apart.

While a well-known adage postulates that eyes are a window of our soul, a witness whose nose and mouth are covered is hard to read.  Experts say that anxiety, disgust, and understanding are almost entirely displayed in the lower part of the face. On the other hand, nonverbal communication can be tricky because jurors, like many of us, are generally poor judges of the meaning of nonverbals, particularly when it comes to lie detection.  Thomas O’Toole, a jury consultant and President of Sound Jury Consulting says: “several studies have shown that the average person’s ability to detect lies through nonverbal cues is no more successful than chance, so a nervous smirk can be misinterpreted as a sign of being untruthful whereas the witness is simply anxious.”  In the case with face masks, this perceived distraction can be easily eliminated.

People who must rely on lip reading for communication, including interpreters, court reporters, and those hard of hearing, will find themselves to be seriously disadvantaged by the facemask mandate.  Courts now offer transparent masks but they could be uncomfortable and tend to fog up.  Some judges use their discretion to allow witnesses to remove masks while testifying, an option authorized by the Governor.

Protecting public health while safeguarding individual rights to trial by jury is a delicate balancing act.  As we are navigating the uncharted waters of this historic judicial experiment, many questions remain unanswered.  Does the virtual approach to jury selection afford the same level of scrutiny?  Does it dispense the same quality of justice?  What happens when the federal relief money is exhausted?  How do we maintain the public’s long-term confidence in the legal system, and how do we continue to encourage people to serve on a jury in the face of the unfolding public health crisis?  Only the future will show.